Mr. Caulder was retained by a desperate father in Cleveland County to regain primary custody of his 16 and 17-year-old sons after the boys ran away from home because they refused to return to their mother. The boys threatened to commit suicide due to the abuse they alleged to have occurred at the mother's home. Finally, the boys decided they were willing to sacrifice their academic achievements and escape from home. The boys were gone from home nearly 6 weeks with neither parent knowing their whereabouts. On the fifth day of a lengthy permanent custody trial, the boys returned home to their father who was awarded primary custody of them. The boys were never again be forced to return to their mother's home where they suffered ongoing emotional abuse. 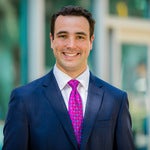 Blake is a North Carolina native who was born in Marion, but grew up in Rutherfordton. While he was truly blessed to be raised in a loving, caring, and stable home, Blake realized at a young age that not everyone had that opportunity and always had a heart to help his friends who were hurting. Upon graduating high school, Blake began working with his father who has a real estate office in Bat Cave, North Carolina, while at the same time, attending Gardner-Webb University. Blake was seeking what direction to go with his career. At the time, the most reasonable thing appeared to be to join his father in his real estate practice. But putting aside the financial aspect and given his passion to help people, Blake wanted to do something that would allow him to take that passion to a whole other level. That's when Blake found the practice of law. Upon graduating from GWU with a Bachelor of Science degree in Accounting, Blake was accepted to Elon Law School and was a recipient of a Presidential Scholarship. After completing his first year of law school at Elon, Blake transferred to Charlotte School of Law to be closer to home and his wife. As an attorney, Blake genuinely cares about each individual client. His first and foremost goal is to help every client achieve the best possible outcome in their case and he strives to make a difference in their lives. Blake practices in the areas of family law, criminal defense, civil litigation, personal injury, and estate planning. While attending law school, Blake acquired significant legal experience in multiple practice areas by interning with both the law firm of Tomblin, Farmer and Morris, PLLC and the legal department of Family Dollar. In addition, Blake defended clients in criminal cases through Charlotte School of Law's Criminal Justice Clinic and provided legal services to individuals who were starting businesses through the school's Entrepreneurship Clinic. When not practicing law, Blake loves being involved in the community, participating in the local prison ministry and community service opportunities. He is grateful to have a wonderful wife, Daniella, and they are blessed with two children, Coleman Blake and Candrea Renea.